You Are Here: Hydrogen Technologies

The Hydrogen Technologies group is part of the Energy Systems department and conducts research on novel control engineering methods for hydrogen-based energy systems. Research focuses on the control of fuel cells and solar thermal power plants for electricity or hydrogen production.

The Hydrogen Technologies group is researching innovative, model-based control concepts that enable the efficient and safe operation of complex energy systems. Modern energy systems have numerous, often coupled input and output variables, so that conventional control structures do not sufficiently exploit the full potential of the systems. The Hydrogen Technologies group develops solutions for such control engineering problems in the field of energy conversion. The focus is on processes using hydrogen as an energy carrier: Our research topics cover a broad spectrum, from control concepts for energy generation in solar thermal power plants to controller development for fuel cells and their use in mobile and stationary applications.

To compensate for fluctuations in the energy supply, storage systems will become increasingly important in the future. Decisive for their economic use are control strategies that take into account both technical and economic aspects, such as price fluctuations during operation. The development of such control procedures for optimal storage operation is another research focus of the Energy Process Engineering group. In particular, the possibilities of a dynamic operation of the fuel cell are investigated.

In principle, storage systems are used in a wide variety of applications: in industrial processes, in regenerative power plants or at central nodes in the electrical grid.

What these applications have in common is that the control system must fulfil at least the following two tasks:

Storage systems and the associated control task are characterized by the following properties:

In cooperation with experts in the fields of storage technologies and energy systems, the Energy Process Engineering group is researching modern control procedures that meet the above-mentioned requirements. The starting point for such work are calculations based on models of future energy scenarios, such as those underlying the "Energy Concept 2050". Our activities are mainly concentrated on: 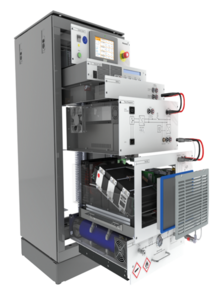 As an alternative to purely battery-based powertrains, the Energy Process Engineering group is also investigating the control of the fuel cell itself. Besides the nonlinear process dynamics, the strongly varying time scales also pose special control engineering challenges. Therefore, hierarchical, nonlinear model predictive controls are used for the dynamic power supply, which explicitly consider the operating limits of the fuel cell stack in favor of a long lifetime and the auxiliary units necessary for air supply. Thus, a higher overall efficiency can be achieved compared to quasi-static operation.

As a basis for control, mathematical models of the fuel cell and the associated system components are developed. In addition to the detailed dynamic behavior, these models contain also important system-internal, non-measurable state variables that influence degradation. For the validation of the methods, both our own test benches and those of project partners are used, on which the underlying models can be validated.

Different time scales of the fuel cell which need to be considered in the controller design.

Air path of a fuel cell with compressor, intake and outlet manifold and outlet valve which are required for providing sufficient oxygen to the fuel cell stack.

In the field of solar thermal power plants, the Energy Process Engineering Group is involved in the control of concentrated solar power (CSP) systems such as the solar tower power plant. Here, the sunlight is focused on a receiver at the top of the tower using several thousand mirrors. The high heat flux densities that are created in this process can be used in a variety of ways, e.g. to generate electricity via a thermal power process or to produce hydrogen in a chemical process. 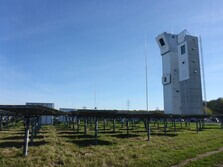 In order to solve the resulting problems, research is being conducted on the application of various methods:

We are always looking for motivated students who want to work in the above mentioned areas within their project-, bachelor- or master-thesis or are looking for a student job. You are very welcome to send us your application.