You Are Here: Funding Project TRIPLE-nanoAUV 1 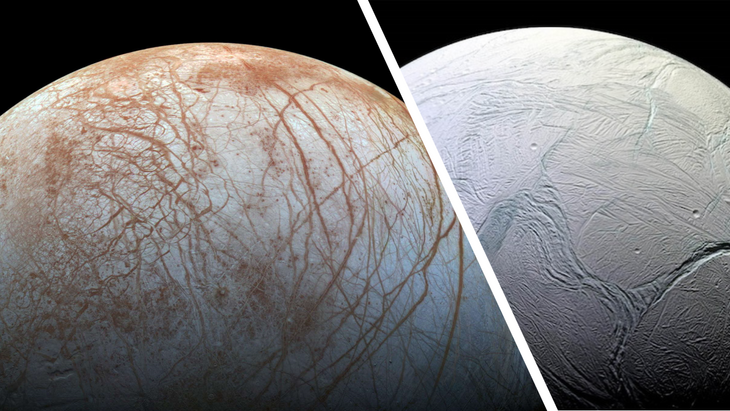 It is perhaps the most exciting question of our human existence: Are we alone in the universe? Two of the most promising candidates for possible life in the solar system are Jupiter's moon Europa and Saturn's moon Enceladus. Both moons are covered by a massive layer of ice and beneath its surface huge oceans of liquid water are suspected. Water as a basic prerequisite for life and other life-friendly conditions make the two icy moons potential targets for future exploration missions for space agencies worldwide. For this reason, the German Aerospace Center, or DLR, has launched the project line "Technologies for Rapid Ice Penetration and subglacial Lake Exploration," called TRIPLE. 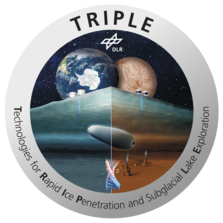 The goal of the TRIPLE project line is to design and build a three-part exploration system to conduct scientific observations in waters under ice and to validate the associated functions during a demonstration mission in Antarctica in close collaboration with marine and space scientists. The planned system consists of a fully autonomous miniature submersible robot (nanoAUV), a semi-autonomous melt-in probe that melts into the ice layer and acts as a carrier system for the nanoAUV up to the ice-water interface, and an astrobiology laboratory (AstroBioLab) to study fluid and sediment samples.

In the TRIPLE-nanoAUV 1 subproject, in which the IRT is significantly involved, key technologies for the implementation of a fully autonomous miniature submersible robot are being developed. Central technological challenges from a control point of view are the high degree of autonomy, the high operational safety under extreme conditions as well as the limited sensor and actuator technology due to the size. In this project, a guidance, navigation, and control system (GNC) concept will be developed and tested. The diving robot will be enabled to plan a path to highly interesting locations at the bottom of the ice seas, to follow this path and to determine its current navigation state with the help of sensor fusion algorithms. 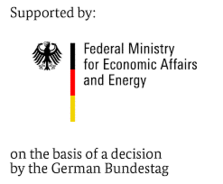 In the project, key technologies for exploration systems of waters under ice are being developed with a view to contamination-free exploration of the ice moons, which are reaching the limits of current technologies. In particular, this concerns the design, the propulsion concept, the degree of autonomy, the underwater navigation and the scientific payload of the diving robot. The concepts are to be investigated in the envisaged follow-up project TRIPLE-nanoAUV 2 for their suitability for possible space missions to the icy moons. The overall system is expected to be demonstrated in the Dome C region of Antarctica and, if the results are positive, will qualify as a potential payload for future NASA exploration missions. 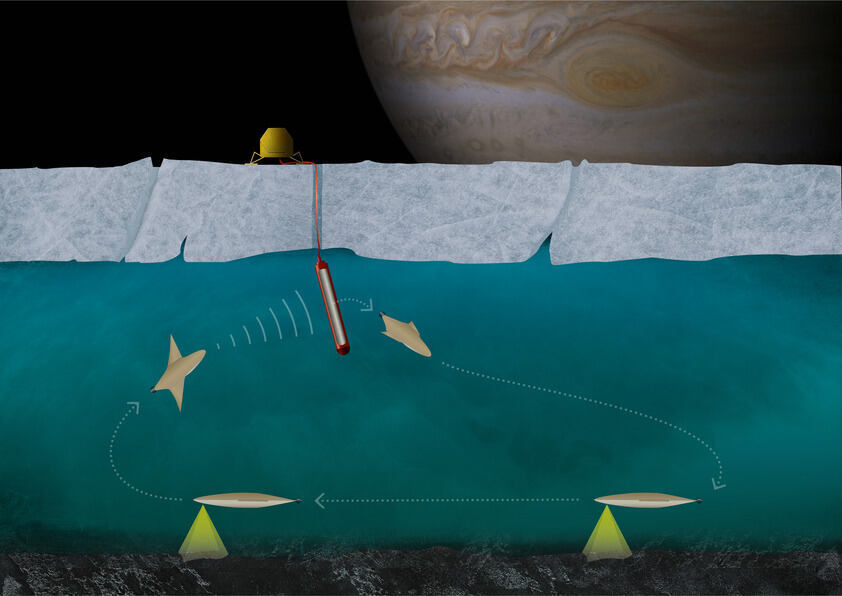 The figure shows the overall TRIPLE system consisting of AstroBioLab at the surface, melting probe at the ice-water border, and the nanoAUV performing an exploration mission.