You Are Here: Petrinet-Tool Netlab

Netlab is a program which serves as editor and analysis tool for Petri nets, also called place/transition nets. This tool has been developed by the Institute of Automatic Control for educational purposes and can be downloaded from this page.

Please take note that this tool will no longer be developed further by the Institute of Automatic Control. Therefore the usage of this tool is at the user’s own risk and no support can be provided by the Institute. 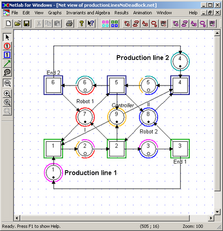 Netlab provides a user interface to create, edit and analysis place/transition Petri nets. A theoretical description of the different analytic methods which have been implemented in Netlab as well as the depicted examples found on this page can be acquired from the book of Dirk Abel, „Perti-Netze für Ingenieure“ ISBN 978-3540518143.

Netlab consists of the following functions:

The editor serves as the interface between the user and the Petri nets structure. Petri nets graphs can be created and edited with the help of the editors.

The Petri nets are represented in their usual manners. It is possible to edit more than one Petri net simultaneously since every net manages its own data structure. The analysis functions, analysis result and the simulator can be called up at the menus.

In the property dialog box of netlab, it is possible to set the menu language to Spanish, German or English.